The Sunday Alternative is a free podcast made for the love of discovering and sharing new music. I do it for free and am happy to do so. However, if you have enjoyed it then please do consider making a donation using this PayPal button. This will enable me to continue with this podcast and also to make other free entertainment, both in the fields of music and comedy, which I will make freely available online.

There is of course no obligation, but many thanks in advance if you do.

If everyone who hit this podcast paid one pound a month it would make a massive difference.

I missed the tram and had to get the ten to seven one instead. Thankfully there wasn't a band in otherwise I'd have kept everyone waiting. I arrived during the seven o'clock news so all wasn't lost.

No Gary this week, but I did have a live band in. Minimum visited Trent Towers from Birmingham.

Gary was ill so didn't come in tonight, he was round my house last and he looked rough then so I knew he wasn't doing an Erik. With no band either, this was going to be one of those shows where the music took over.

Not to worry, I had a big bag of pod peas to eat! 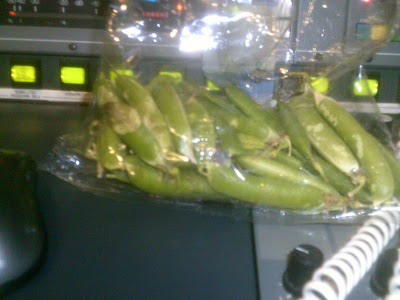 This week's edition of The Sunday Alternative was presented by the reunited radio team of Andy Haynes and Bainy while I was in London. 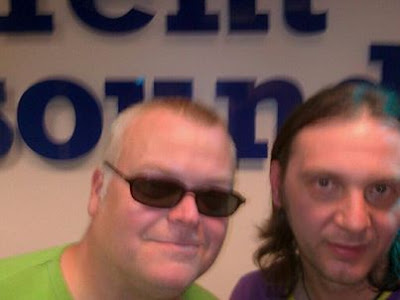 The show got off to the shakiest start ever this week, as we were locked out of the studio as the show begun. The last live show on a Sunday finishes at five, and then there's an hour long pre-recorded show before we take over at seven. Joe and Sam, our sound engineers, were outside the studio when we got there, unable to get in because someone had locked the door with the 'big lock' so we couldn't get in with the entry code. To make matters worse, the band Throw The Goat turned up. Phone calls and text messages were sent to the station boss to come and let us in, and Gary started listening to the show on his phone so that we could hear what the automated system played from our song library, (thankfully from The Sunday Alternative library and not some pop shite).

Eventually we were able to get in, and I then had the task of putting the show together. The automated system had played 'I'll See You In My Dreams' by Joe Brown, and a song by Dandy Livingstone, I forget the title. I set up the opening jingles and first two tracks, and declared that the show officially starts now. There was then the other problem of the band not bringing instruments with them, as they had thought that I was providing acoustic guitars due to a mix up over email correspondence. Gary rang his brother Craig, (another quarter of Prefontaine) and a guitar was delivered to the show. To say what a poor impression the band had been given of us, Throw The Goat were brilliant company and charming guys. They were over from California on a mini-tour of the UK, and we were their first port of call. Unusually for a live guest, they stayed for the whole show and acted as an audience to our ramblings and contributed some song choices.

Throw The Goat live
'Beef'
'Having A Beer'

The Third Bardo 'I'm Five Years Ahead Of My Time' 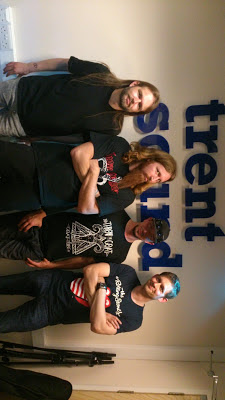 I have no fucking idea how to rotate this picture. In my photo album it is the right way up.
Posted by Steve Oliver at 04:40

The Sunday Alternative opening jingle, as written by Broken Record